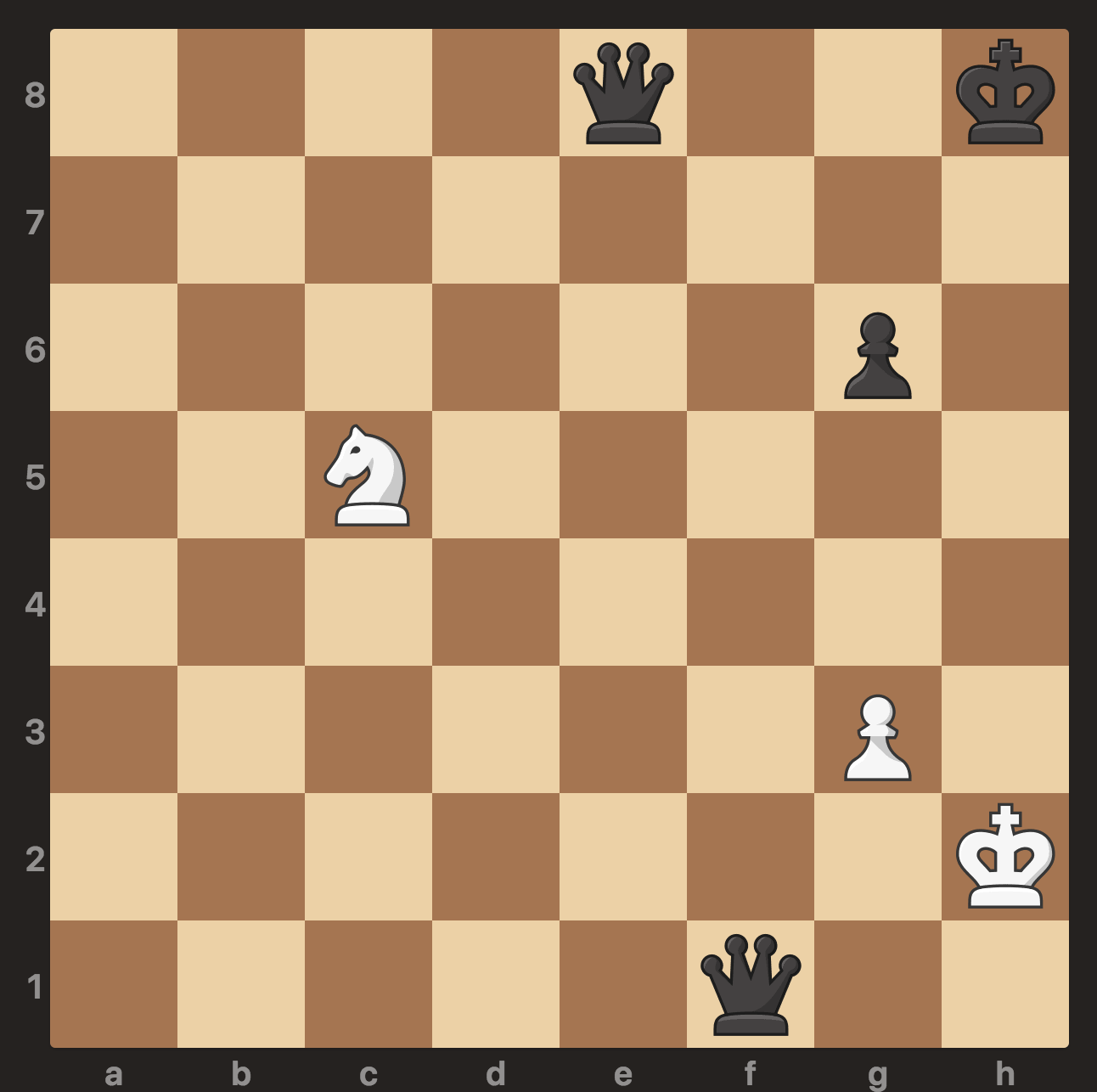 As we all know, in chess, you win the game if you checkmate the opponent’s king.

How To Get Checkmate

Checkmate is a move or a game position wherein one player makes a move such that the opponent’s king is in check and the opponent has no move to remove the threat to the king.
In the example below, White has given a check. The king has no safe square to move to. Neither can any other piece block the check nor can the attacking pieces be captured. White wins this game as it is checkmate. 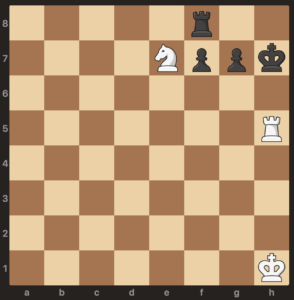 This is called the Anastasia’s Mate.
There are different ways to give a checkmate. One of the ways is to acquire an extra queen and use the advantage and press for a win.

Can You Have Two Queens in Chess?

Yes, a player can have more than one queen on the board using the rule of promotion.

Promotion is a rule whereby you can move your pawn to the last row on the opponent’s side and convert it to a more powerful piece such as a rook, bishop, knight or Queen. In most cases, players convert the pawn to a Queen, unless there is a better chance of winning with another piece.

How to Get Two Queens in Chess?

When you already have a queen and promote a pawn to be a queen, you will have two queens. You are allowed to move all pawns to the other side of the board, i.e. to the last rank on the opponent’s side, and acquire eight Queens which will make it a total of nine queens! This is slightly impossible or the game is skewed too much towards the winning player. Even then, the game would probably be over before the player has a chance to promote all pawns to queens!

In the example below, the pawn will move to f1 and the pawn is promoted to a Queen. Black will then have two queens. 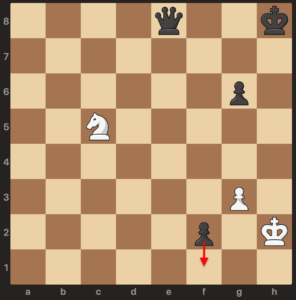 Below is a chess board that has A King vs A King and Two Queens.

What is the minimum amount of moves it takes you to checkmate the computer?

In this article, we will be discussing how to checkmate with a king and two queens vs a lone king.

We will cover why you need to learn this endgame, when and how it occurs, the technique used to make winning this endgame a no-brainer, as well as some sample problems below.

If you want to skip the discussion about how to do this and jump in straight to some sample problems, then click here test your understanding.

Introduction To Checkmate With Two Queens

As a beginner, you only need to be aware of a few different types of checkmates.

And this is one of them.

This is one of the most basic checkmates that can possibly occur.

And one of the most common and most frequent ones.

By learning this, you will not lose any games or lose any rating points unnecessarily.

When does this Endgame Occur?

You’ve played a pretty good game against your opponent and found yourself in a situation where you are ahead a bunch of material but couldn’t checkmate your opponent early on.

Perhaps you kept your queen on the board and were able to promote one of your pawns to get another queen.

Or perhaps you were able to promote two pawns into queens and now you have two queens on the board.

How do you go about sealing the deal and claiming a victory?

Why do I need to learn this?

Let’s say you are playing and find yourself beating your opponent.

You are ahead of a bunch of material against your opponent but you are short on time.

In this situation, what do you do?

If you can, you need to try and get your pawns promoted as quickly as possible into queens.

Once you do that, it will take you only seconds (once you master this technique) to go ahead and checkmate your opponent.

Let’s say you are in another scenario where your opponent refuses to resign.

He decides that he wants to and will play all the way until the end.

You do not want to be in a scenario where you are up all this material but cannot win the game because you don’t know the basic checkmating pattern.

How To Win This Endgame

The main idea for checkmating with two Queens on the board is to start cutting off sections of the board away from the enemy King.

There are two different strategies for going about doing this.

Strategy one is the most efficient (in terms of taking the least amount of moves) but does require some thought to make sure you don’t accidentally stalemate your opponent.

You will see this strategy used by computer chess engines (as they are able to calculate how to limit their opponents squares very quickly) and by most chess players given that they have a lot of time left on their clock.

Strategy two is the most efficient (in terms of taking the least amount of time on the clock) and requires very little thought to execute correctly.

But it takes the most amount of moves to do.

You will never see this strategy used by computer chess engines, but this is the strategy most frequently used by most chess players and what you will see most often when playing chess.

The reason why is that this strategy requires very little thought.

The main advantage of this is that the necessary moves required to checkmate the opponent can be done very fast (since it requires very little thought because you just follow a process).

You also gain the benefit of having a low chance of stalemating your opponent.

This becomes very useful when you find yourself playing.

A lot of the time, by the end of a game, you will be short on time.

You will need to be able to checkmate the opponent as fast as possible or you will run out of time and lose the game.

Let’s start with this starting position:

Let’s breakdown Strategy 1 and Strategy 2 below:

By playing Qd5!, the black king is cut off from accessing over 75% of the available squares on the board.

Visually, by looking at the two red arrows above, the black king can never be on any square that the arrow touches.

This is because crossing any of these arrows will be an illegal move since the King will risk itself being captured.

And because of that, these arrows act as boundaries that the opposing king cannot cross.

Let’s say the Black King retreats back to the last rank.

The Black King then retreats to the only square it has available:

Now White plays the finishing blow, by using the other Queen to take control of the 8th rank.

Notice here that White did not need to use his King at all.

This is always the case when two queens are trying to checkmate a lone king.

What I showed you above was the fastest way to checkmate the Black King.

If you have plenty of time and want to checkmate your opponent in the most efficient way, then this is the technique you want to use.

This technique does require some thinking, however.

You need to make sure you maximize the squares you limit from your opponent and if you are not careful, you can find yourself in a stalemate situation.

A lot of times, however, you will be in a time crunch.

You will be short on time and need to checkmate your opponent as fast as possible (in terms of seconds leaving the clock).

In these situations, you are going to want to know the next move to play immediately and follow a step-by-step process to make sure you do not accidentally stalemate your opponent.

Ok so now we are going to break down strategy two here, which is referred to normally as rolling your opponent’s king toward a checkmate.

You will see why its called this after you are seen this example.

Given the starting position above, which will be shown here below for reference, let’s talk about how to roll the enemy King toward a checkmate.

So the red arrows show the squares the White queens will take up the board.

This path will start by first playing Qg2!

This move will cut off the 2nd rank from the enemy king.

Regardless of the Black king’s next moves, white will automatically play Qh3! next.

This move will cut off the 3rd rank from the enemy king.

Let’s say black plays …Kc6 to get back on the c6 square.

Regardless of whatever Black king’s next move, white will automatically play Qg4! next.

This move will cut off the 4th rank from the enemy king.

Let’s say black doesn’t take us seriously and plays …Kb6 to get back on the b6 square.

Again, it doesn’t matter what move Black because White will automatically play Qh5! next to cut off the 5th rank.

Let’s say black plays …Kc6 to get back on the c6 square.

Now it’s time to take control of the sixth rank and kick the black King back.

Now black cannot play either …Kb6 or …Kc6 because we now control the 6th rank.

Visually, if you look at the diagram above, you will see that black cannot touch any of the squares that are being skewered by the White Queens.

Specifically any square on the 5th or 6th ranks.

Now black is forced to go back to the 7th rank, even though Black was playing waiting moves the whole time.

White will play Qh7! to now cut off the 7th rank from the board.

In this scenario, Black will only be able to place his King on the 8th rank.

Regardless if Black chooses Ka8, Kb8 or Kc8 as it’s next move, White will follow this strategy and now take the 8th rank with Qg8#.

Now black is in check and has no available ranks to retreat to.

Black is now in checkmate and you’ve won the game.

Why You Need To Learn Chess Pawn Structures